Summer is on its way (even though I woke up to a snow storm here the other day),  which means I need to get my salad game on point.  This is a delicious twist on classic tabbouleh.  I have been meaning to try this recipe for ages.  I found it in an old Waitrose magazine, cut out the recipe and squirrelled it away for who knows how long.  I stumbled upon it the other day and decided to give it a go.  I changed up some of the spices and ingredients and used coriander instead of parsley (I don’t know what it is I have against parsley) and the results were delicious.

For some other salad ideas, check out my Caesar Salad with Almond ‘Parmesan’, Raw Pad Thai Style Salad, Butternut Squash and Quinoa Salad with an Orange and Pomegranate Dressing, Malaysian Style Rojak Salad and my Watermelon, Cucumber and Mint Salad

1/2 a cucumber, deseeded and cut into small chunks

a couple of spring onions, sliced

seeds of one pomegranate

a good handful of fresh coriander and mint, chopped 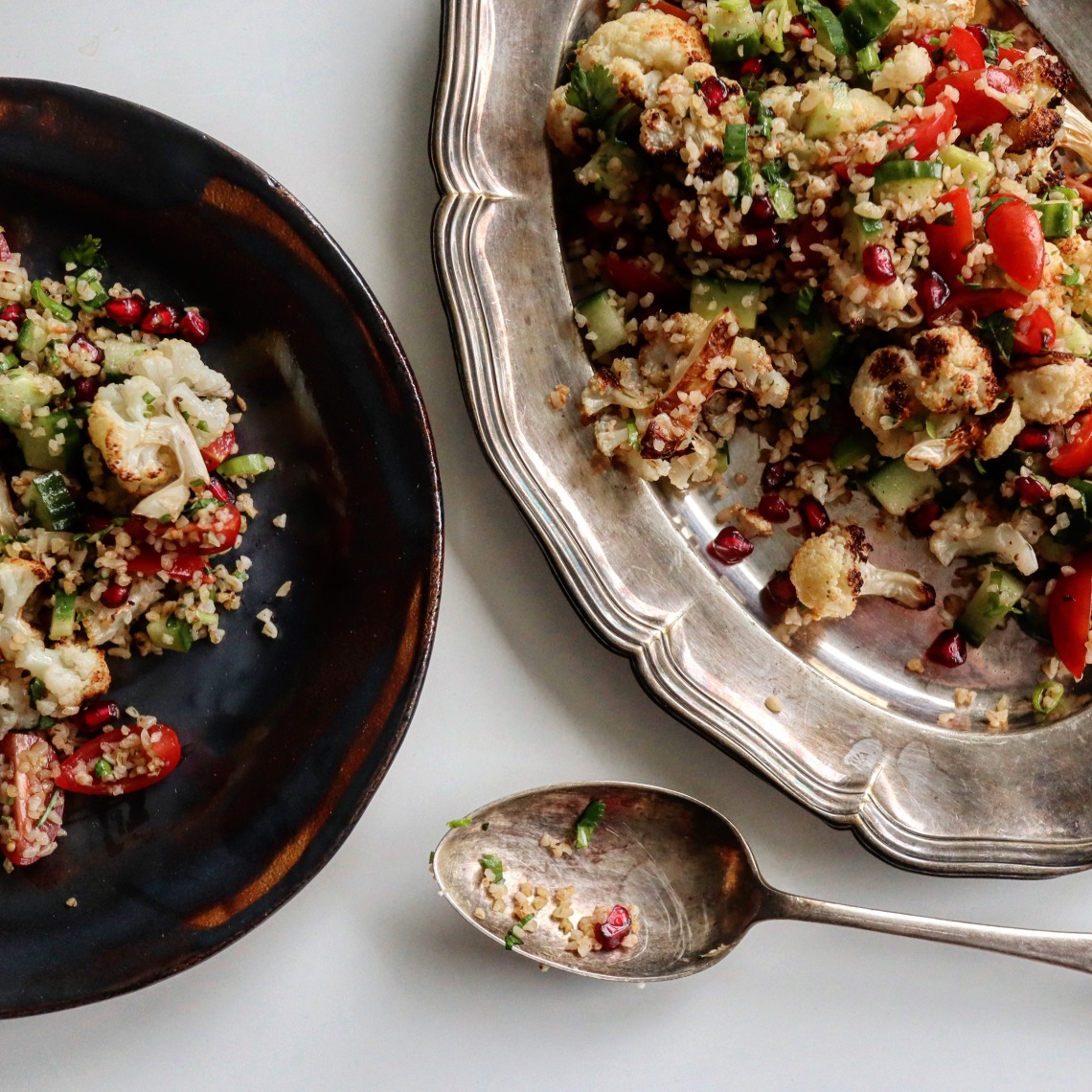 Preheat your oven to 200˚C.  Toss the cauliflower with 1 tbsp olive oil, season and spread out on a baking tray. Cover with foil and roast for 20 minutes, then uncover and roast for a further 20 minutes, until tender and beginning to caramelise.  Set aside to cool.

Meanwhile, toast the coriander and cumin seeds until golden and grind in a pestle and mortar.  Put the bulgar wheat in a bowl and cover with boiling water.  Set aside for 10 minutes. Drain in a sieve and rinse with cold water.  Squeeze as much water out as possible before tossing with the spices and spread out on a baking sheet lined with baking paper.  Bake in the oven for 10 minutes to allow it to dry out and crisp up.  Set aside to cool.

In a large bowl lightly mix the bulgar wheat, cauliflower, tomatoes, spring onions, cucumber, pomegranate seeds and herbs.   Drizzle with the flax seed oil and a squeeze of lemon, check the seasoning and serve.